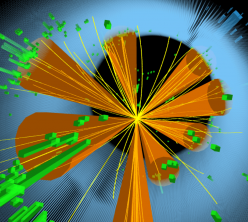 My research is focused on fundamental particle physics using particle colliders. Currently, I am a member of the Compact Muon Solenoid (CMS) collaboration at the (CERN)'s Large Hadron Collider (LHC), the highest energy collider ever built. The CMS experiment measures properties of the particles and interactions of the standard model of particle physics and searches for deviations from the standard model, that indicate new forces and particles.

My research interests center on the fundamental shortcomings of the standard model regarding the origins of the mass of fundamental particles, the nature of the dark matter that comprises most of the mass of our universe. My group focuses on a broad set of measurements and searches for new physics that aim towards elucidating the nature of electroweak symmetry breaking and our understanding of the weak physics scale. I've served a two-year term (2018-2020) as  TOP Physics Analysis Group convener and I have been appointed Physics Coordinator (2021-2023) of the CMS experiment.

My group is a major contributor to the CMS inner tracking detector (silicon pixel detector), which can take 65 MPixel photos of LHC collisions every 25 nanoseconds, in order to precisely identify b quarks, which are found in the decay of the top quark and the Higgs boson, with micrometer precision. We are now deeply involved in the next generation of the future inner tracker aiming to start taking data in 2027.