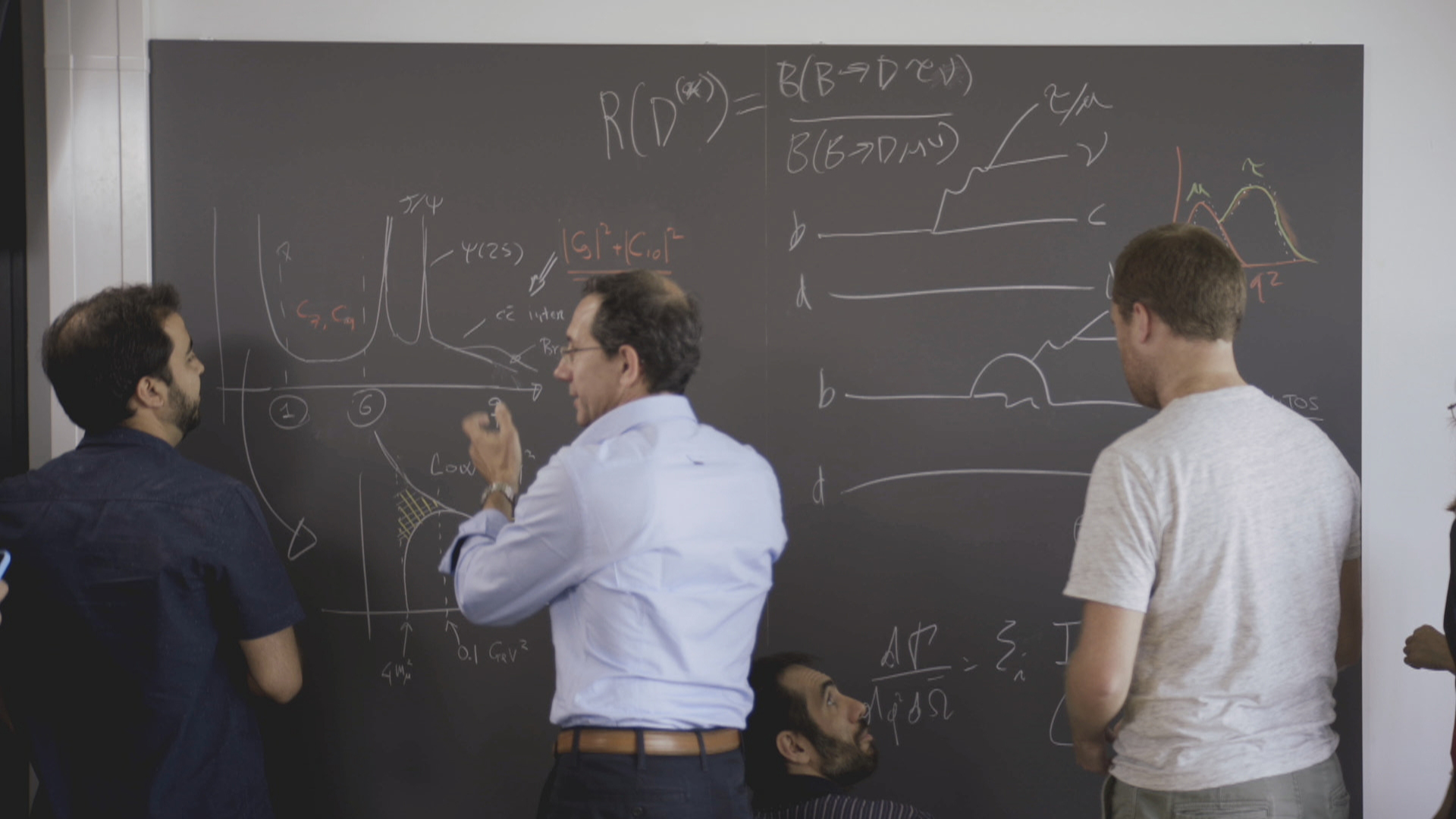 How particle physics works I

Hopes and Worries on B-physics Anomalies

Theoreticians end experimental physicists are closely collaborating to find out if the anomalies observed by the experiment LHCb can be confirmed, and in case how this would change the Standard Model. But what are these anomalies? And how is the Physicists community discussing about them? 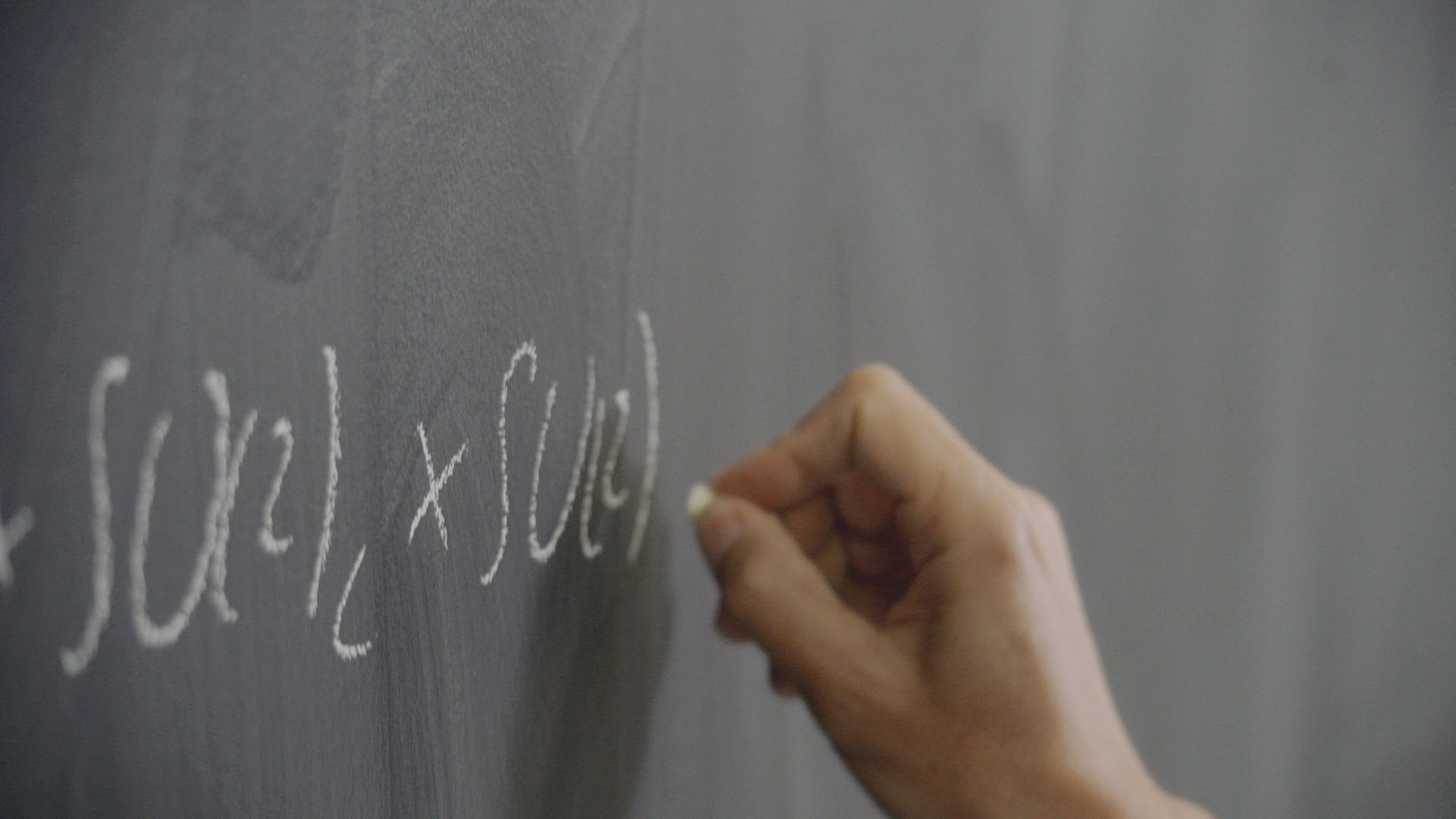 An interview to G. Isidori

Hints of a New Microscopic Force

The experiment LHCb, at CERN, has recorded unexpected events which seem to contradict the Standard Model of particle physics. This video explains how these results, if confirmed, might change our understanding of the microscopic laws of nature.

A new force to understand the origin of particle masses

Searching for clues on how to go beyond the Standard Model

What do we know

Which are the basic constituents of matter? And how do they interact?

Since almost 50 years, physicists have developed a theory that answers to these questions.The theory is called “Standard Model” and represents one of the biggest achievements in the history of human thought.

According to the Standard Model, all what we usually call “matter” is formed by 4 types of different elementary particles: 2 quarks (the constituents of atomic nuclei) and 2 leptons (such as the electrons and the neutrinos), interacting among themselves. Each of these basic constituents appears in Nature in 3 different copies. These copies have identical properties, such as the electric charge, but differ for the mass. We thus have a total of 4*3=12 different types of quarks and leptons.

These particles interact through 4 elementary forces:

Elementary forces exert their effects through the exchange of other type of particles, called “bosons” (the photon, for the electromagenic force, the gluons, for the strong force, and so on), whose nature is completely determined by the properties of the corresponding force.

The Standard Model finally includes also the Higgs boson, whose existence has been suggested by Peter Higgs in 1964, and whose discovery has been announced by CERN in 2012. The Higgs Boson is very different from the other elementary particles: it is the excitation of the “Higgs field”, a form of energy that permeates the whole Universe. It is thanks to the interaction with the Higgs field that all the elementary particles acquire their different masses: the only characteristic that differentiates them all.

Overview of the Standard Model 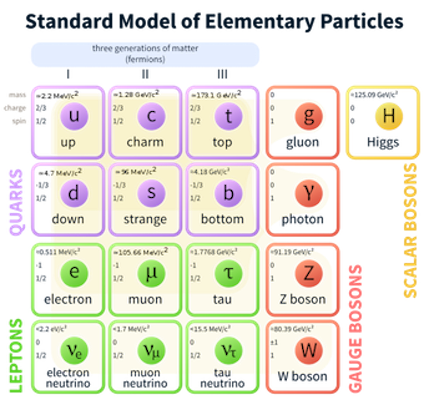 Although the Standard Model provides a very good description of the matter surrounding us, it leaves important questions unanswered.

For instance, while the mechanism responsible for particle masses is understood from a technical point of view, why particles apparently similar have different masses is something we are not able to answer within the Standard Model.

Other key issues deals with astronomical observations: what we call “matter” (i.e. stars, planets, and interstellar gas, composed by the particles included in the Standard Model) seems to represent only about 4% of the energy present in the Universe. The rest is something whose fundamental nature is not known, and that we conventionally call “dark matter” and “dark energy”.

Given these and others critical aspects, we (particle physicists) are all looking forward for clues that might help us to formulate a broader theory: a theory that would include the Standard Model but could also provide explanations for its unanswered questions. Unfortunately, since many years, experiments have not to opened new doors, they only provided more and more confirmations about the validity of the Standard Model.

Hints toward a new theory?

We are somehow victims of the success of this beautiful Theory.

At CERN the experiment LHCb (JPG, 707 KB) has recently recorded some “anomalies”, i.e. some results that do not seem to confirm the expectations of the Standard Model. Interestingly enough, these anomalies are not related to the production of a new type of particle, but rather on how the known particles interact. Would they be confirmed, these anomalies could be the long awaited first clue needed to start building a new exciting theory, as explained in this video.

But which anomalies detected LHCb? And what physicists think about them? Watch this video to find out.

If you are interested to see how the situation is evolving, you can look at this video