XENON is a direct detection dark matter experiment that employs liquid xenon as a target medium. The goal is to detect the small charge and light signals that arise from a collision between a xenon nucleus and a dark matter particle in a liquid-gas time projection chamber. The prompt light signal (S1) is detected with two arrays of photomultiplier tubes. The ionization electrons are separated from the xenon ions and drifted upward in the liquid by an electric field until they are extracted at the liquid-gas interface with an even stronger field in the gas. Upon extraction, they generate secondary scintillation light (S2) that is proportional to the charge signal. This secondary signal -- delayed relative to the S1 by the time it takes the electrons to drift -- is observed with the same two photomultier arrays. 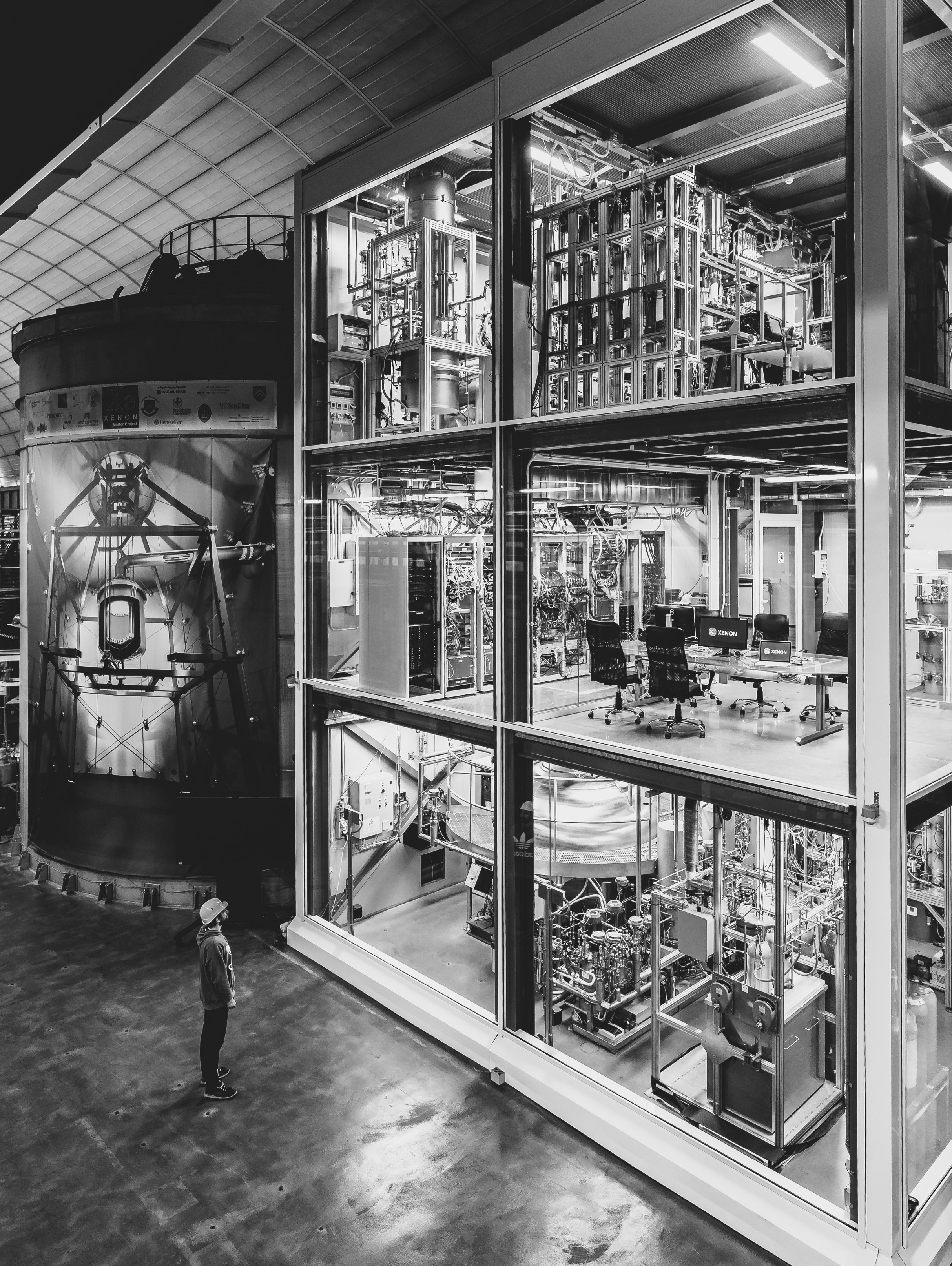 The XENONnT experiment at LNGS

The TPC is designed to reconstruct the precise  3-dimensional position of the interaction site. These known positions then allow us to separate background events from our desired signal through a process known as fiducialization, the selection of an inner low-background region. Furthermore, the charge-to-light ratio, S2/S1, differs between electron recoils (background) and nuclear recoils (signal), thereby providing additional background discrimination.

The first phase -- XENON10 -- was successfully operated at the Gran Sasso Underground Laboratory (LNGS) until 2007, contributing the best limits on WIMP dark matter of its time. The second phase -- XENON100 -- achieved its projected sensitivity, surpassing XENON10, before it ceased operation in early 2016.

The third phase of the XENON dark matter search project -- XENON1T -- was the largest xenon TPC ever constructed. It operated throughout 2018.

The upgrade to XENON1T, known as XENONnT, is completed and commissioning is well underway as the next phase of the XENON dark matter program. The TPC field cage, PMT arrays, electrodes, and field shaping rings were assembled in an ultra-clean environment. Nearly 500 3-inch Hamamatsu R11410 photomultiplier tubes sit at the top and bottom of the chamber. At this scale, XENONnT holds three times as much xenon in its active volume. This in turn will allow us to use a larger fiducial volume and achieve a significantly lower radioactive background level. The TPC will also be guarded by the water Cherenkov muon and neutrino vetoes to tag events that would mimic dark matter. Together, these features enhance our sensitivity to rare dark matter events. XENONnT is expected to acquire science data from Spring 2021.

XENON1T was one of the most ambitious ongoing dark matter projects. It was a dual-phase LXe TPC with a total mass of ~3 t and a fiducial mass of ~1 t. Two arrays of 3-inch Hamamatsu R11410 photomultiplier tubes were installed on the top and bottom of the TPC to detect the scintillation light from particle interactions within the xenon target. In order to reduce the ambient backgrounds to negligible levels, the XENON1T detector was housed inside a large water shield -- 10 meters in height and 9.6 meters in diameter -- and instrumented with 84 8-inch Hamamatsu R5912 PMTs, which provide an active Cerenkov veto and a shield against environmental radiation. The XENON1T detector is shown above with the Cherenkov muon veto.

XENON1T commenced operations in late 2016 and provided its first, world-leading result with a short 30-day run. Operations continued throughout 2018. We reached the lowest background ever achieved in a dual-phase TPC: 82 events/tonne/year/keV. This ultra-low background granted us the highest degree of sensitivity to spin-independent WIMP-nucleon interactions. With an exposure of 1 tonne-year, we set the current leading exclusion limiton the WIMP-nucleon scattering cross sections, with a minimum of 4.1×10-47 cm2 at a WIMP mass of 30 GeV/c2. This limit lies two orders of magnitude below that of XENON100 and a factor of 20 below the current best limits from the LUX and PandaX experiments. 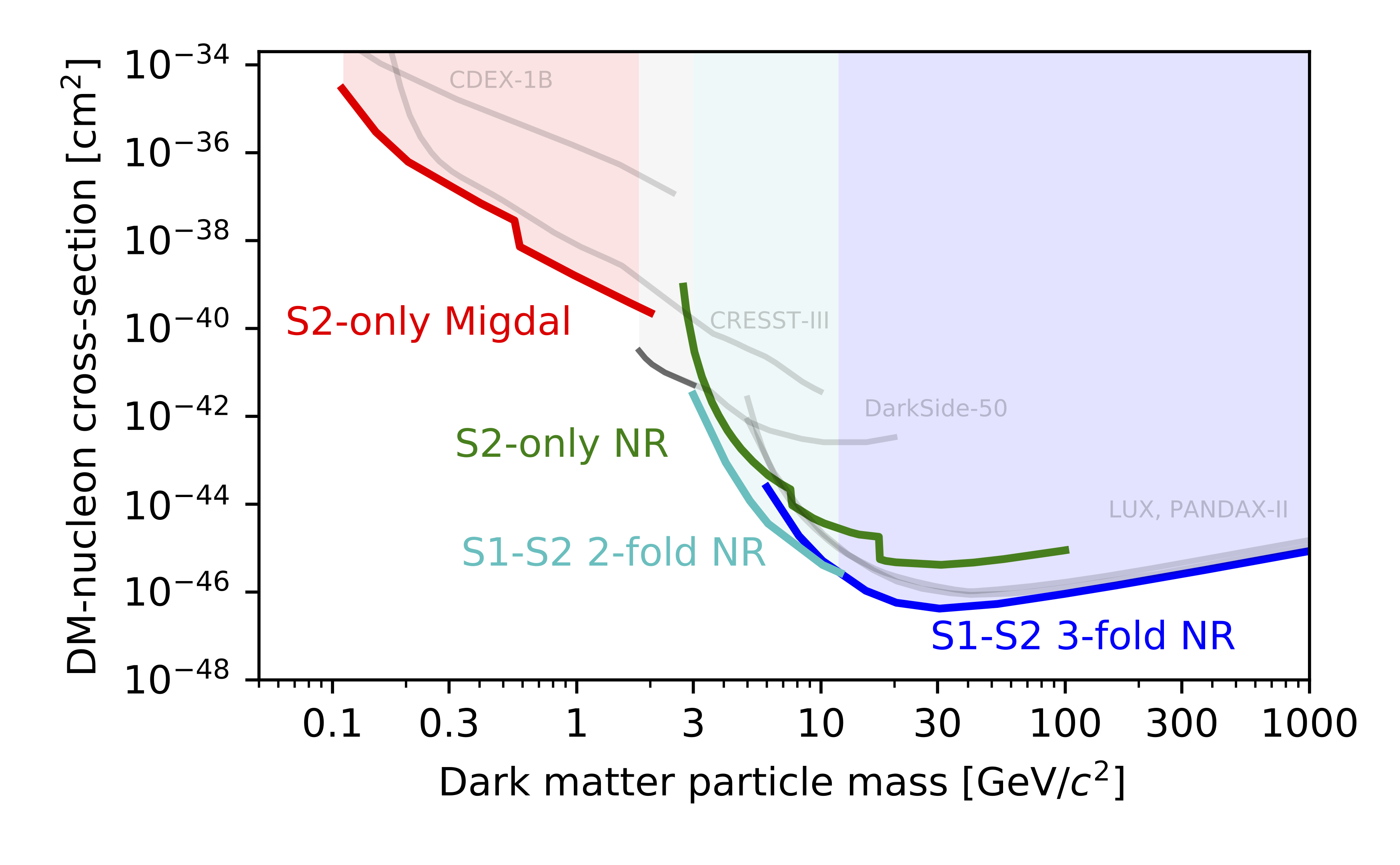 In a search for signatures in the electronic recoil band, XENON1t also detected an as-yet unexplained signal. This could be a hint of new physics, such as solar axions or an enhanced neutrino magnetic moment, or it could be a new background, given the unprecedented sensitivity of XENON1T. The results on the  excess electronic recoil events were published in Oct. 2020, and we expect to learn more about the nature of this signal with the first few months of XENONnT data.

XENON1T was decommissioned in the first quarter of 2019 to begin the construction phase of its successor, XENONnT.

Within the XENON project, we co-lead several collaboration-wide working groups, focusing on the design of the time-projection chamber, the construction of the field cage, the cabling, the characterization of photosensors in liquid and gaseous xenon, the detector calibrations with LED light and radioactive sources, the radioactive screening of detector components, and Monte Carlo simulations.